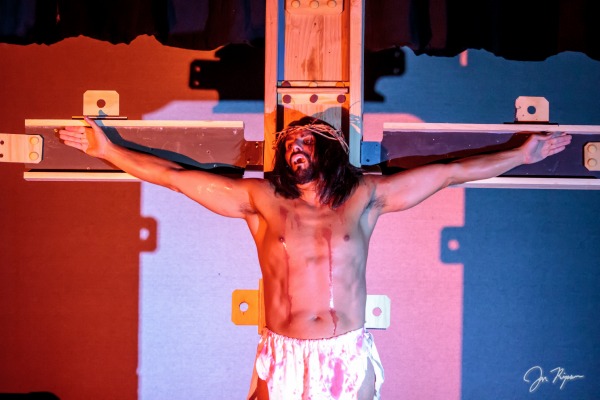 With this production I wanted to take it outside of the traditional passion play aspect and delve into the class struggles that exist in today’s society. What if someone like Jesus came today? How would we react? That’s what I wanted to explore. And in today’s world it really is the homeless vs. the new order of wealthy young people. How do we find hope and faith when so much of everything else is going wrong?

In the spirit of full disclosure, I have to first immediately say that I’ve known Chris Turner for 20 years, although we fell out of touch for some time. I’ve gone to several plays that he’s directed, and he invited me for opening night of JESUS CHRIST SUPERSTAR at the Wilmington Drama League. So in the spirit of fairness, I’m going to start you off with my friend Kelly Brown‘s take on the show:

When I was in high school, I became heavily involved in community theater— especially musicals. My first part was in the chorus of Jesus Christ Superstar and it quickly became one of my favorite shows. Jesus Christ Superstar, a 70s rock opera, loosely portrays the final week of Jesus’ life as presented in the New Testament. The focus of the show revolves mostly around the inner turmoil of the disciple Judas and his struggle to find middle ground with Jesus, whom he believes has taken his proselytizing too far.

Despite being a favorite, I tend to find the show a little tired with its use of period clothing. So I was delighted when the stage lights came up and revealed a reimagined and modernized Jerusalem. Using a one-set stage design that is reminiscent of Jonathan Larson’s RENT, director Chris Turner breaks away from the staleness of the 1970’s production. In addition to the one-set design, Turner utilizes a video display to present a montage of current events that remind us that protest, war, terrorism, persecution, poverty and, immoral behavior are a long-running theme in the history of humanity. Thanks to this one-set design, there is no fumbling with set changes or down-time between scenes. This keeps the show moving at an enjoyable pace. 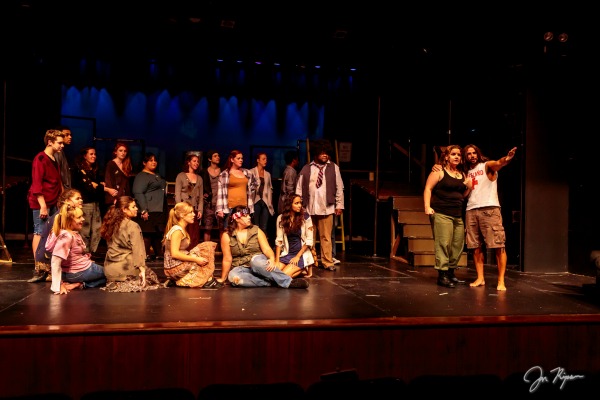 Further modernizing the show, the characters are dressed in regular street clothing as they danced around the stage in exciting choreography not traditionally used in the show. I would have liked to see this styling tightened up a bit as some of the chorus stuck out like a sore thumb with pops of pastels against other actors blacks, grays, and browns. The styling, while refreshing and enjoyable, seem to float between eras and have no real direction. Mary’s costuming smacked more of a teenage hippy rather than the promiscuous sinner that the lyrics of the show would make her out to be. And betrayer Judas blended easily into the background dressed all too similarly to the chorus. I did however enjoy some of the irony in Jesus’ costuming; as well as the serious uniform, yet flamboyant purple camouflage of Pontius Pilate. I also found Jesus’ hair, a wig, to be very distracting. With the modernization of the show, I would have preferred to see Jesus with a more modern cut. But it seems that, try as we might to refresh an old tale, theater tends to fall back on old tropes to help the audience remain familiar and comfortable.

The costume design hit the nail on the head with King Herod and his dancers in Act 2. In fact, I would dare to say that Steven Weatherman, with his sequined dancing girls, his boys in short-shorts, clever ad libbing that reveals Herod’s true sexual preferences, and general flouncing stole the show.

In my many years of participating in community theater, I’ve learned that choosing voices for such a small cast can be perilous. An actor that tries too hard or doesn’t try enough can make or break an entire show. After watching the behind the scenes video of the production, I questioned the choice of the soft-spoken Rick Fountas and his ability to capture the right tone for a rock opera. I was pleasantly surprised and delighted as I sat and listened to this talented performer call on his inner Robert Plant to bring power to a meek and gentle character. 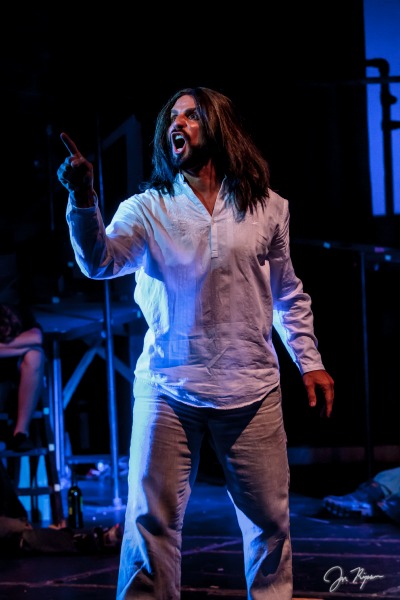 I found myself enraptured by Kristin Romero Sheehan’s understated yet beautiful lullabies to Jesus. Her rendition of ‘I Don’t Know How To Love Him’ was endearing and comforting as it momentarily removed us from the knowledge of the violence that lie ahead.

Another standout for me was Bethany Miller who portrayed smaller parts of a Priest and was part of the chorus. Her performance as a lackey for Caiaphas brought light to the taunting and emotional manipulation employed to make a patsy of Judas in the murder of Jesus. Rather than wilting in a role traditionally given to a man, she shone above her co-performers. Miller carried herself with authority and a wry smile that suggested she may be the one running the show.

There were a few missteps in the show’s re-imaging. I was very uncomfortable with the High Priests use of a Hitler-esque salute as they chose to condemn Jesus to death. While I understand the symbolism and the sense of evil the gesture evokes, it felt inappropriate to use a sign so similar to something associated with the Holocaust. Additionally the use of guns in the show, and the subsequent visual of Judas’ suicide were mildly disturbing during a time when our city that is overwrought with gun violence.

Overall the show, in spite of its small glitches and distractions, is a complete success. The fast pace, talented vocalist, set and costume design, and backing orchestra demand your attention and draw you into the story of Jesus. Furthermore the ensemble cast and their stories pique your curiosity about the witnesses to the last days of Jesus Christ. It’s a refreshing take on an old classic, and a must-see! 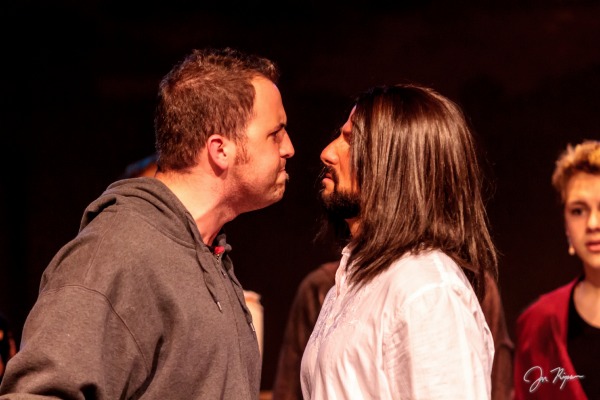 I’d never seen this particular musical before, I have no background in theater and I purposely didn’t read up before I went. This is a clean slate review 🙂

From the opening remarks I gleaned that Chris was offering a different, more modern spin on the material. We were seeing the 99% try to take on the 1%, and among the Apostles were war veterans, returned and cast aside. I admit I was hoping for an unconventional Jesus as well, but I was quickly appeased when I saw Rick Fountas. If you’ve got a deadringer for a classic Christ, I imagine it’s difficult to pass him up, especially if he can hit the notes this man can. (The Apostles, however, were a diverse group of men and women which I heartily approved of in a modernized version. I also liked the notion of Jesus’s followers being, e.) Kelly already did a really good job discussing the cast, so I won’t rehash those points; I just want to add that I loved Daniel Urdaneta’s voicee as Pilate, and that Bethany Miller shot ice into my heart; she was fantastically unnerving.

JESUS CHRIST SUPERSTAR is the life of Jesus as seen from the point of view of Judas, the betrayer. For those of us who have internalized the Bible as presented through 12 years of schooling and a lifetime of church-going, it’s a difficult concept to wrap your mind around— at first. But as the plot stays essentially true to the stories we’re familiar with, we’re forced to admit that Jesus would seem quite the madman to someone who had been with him from the beginning. Leading a movement for the downtrodden and speaking for the masses but not acting as we think a respectable leader should: consorting with prostitutes and the otherwise detestable. Calling himself the son of God. Allowing himself to be washed with expensive perfumes when that money could be used for the poor. Contradicting himself. 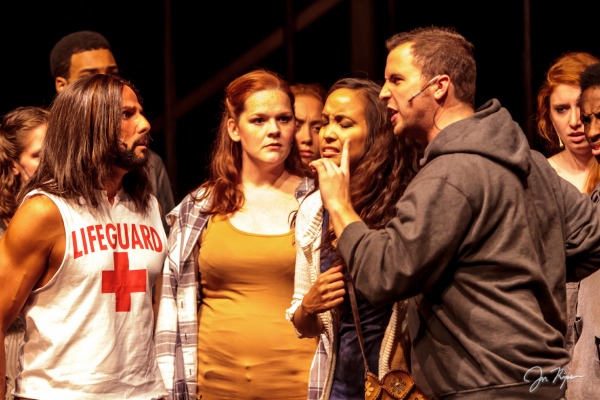 Judas is certain Jesus is headed for a fall, and going to take his followers down with him. He wants to stop him before damage was done. And yes, he wants to save himself in the process. Putting aside what we now know: can we understand his plight?

The first act of this particular production had some normal opening night jitters, among them an issue with Jesus’ mike pack. I have hearing problems, so I found myself straining to hear and understand what Jesus was saying (and then was somewhat amused to think I’m probably not the only person who has ever thought that). Jesus rang clear as a bell in the second act though, and I grew increasingly emotional watching the narrative I’m so familiar with unfold. I know the focus was supposed to be on Judas— and Judas’s final scenes were powerful to be sure— but I couldn’t stop thinking about Jesus.

Jesus, after all, was one of us. Human. He was angry (with those turning his Father’s house into a place for sin). He was overwhelmed by the masses seeking him to heal them. He was frustrated and hurt by the knowledge that his closest friends would betray him. 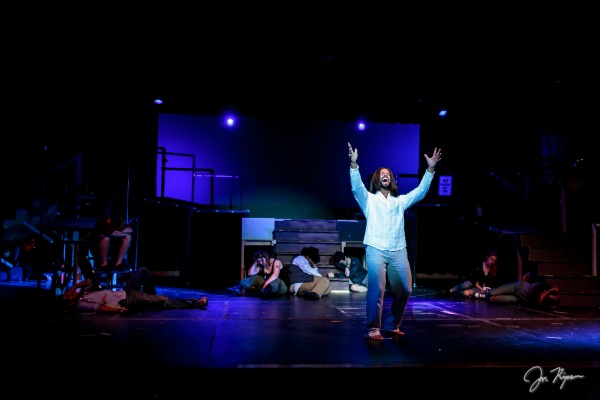 He was afraid in the Garden of Gethsemane, pleading to have this cup taken from him (this scene in particular I found heart-wrenching). He was in pain as he was whipped. And he called out for his mother while suffering on the cross.

Watching this performance has caused me to dwell all week about Jesus the man, about the nature of storytelling and oral tradition, about the questioning of faith, about how the message has changed throughout the years. I’ve thought about how Jesus would return today: of who the downtrodden would be that he would champion, of what practices he might condemn in his Father’s house or in His name, of what he might deem pride and hypocrisy. Of what he might think of the term Christian as it’s used today.

I’ve brushed off my bible and my notes from a History of Christianity class I took in college. I’ve talked to my kids about it all, spiritedly and at great length. I think I’m going to bring them to see the musical for themselves, so that we can discuss it further.

That, to me, is the very best kind of theater. The kind that touches you in the moment and continues to live on vibrantly in your thoughts and discussions.

There are just a few more performances of JESUS CHRIST SUPERSTAR remaining at the League; don’t miss your chance to see it! It plays tonight (Saturday) at 8pm, tomorrow at 2pm, as well as at 8pm on September 26th and 27th. Tickets are $20, $17 for seniors, $12 for students. Group discounts are available.

Please keep in mind this is community theater: people donating their time and talents to bring these shows to the community. They are amazing. Do everything you can to keep the arts alive and thriving in Delaware! And if you’re a bit of a drama nerd yourself, volunteers are welcome.

Coming up: To Kill a Mockingbird opens October 24. And I’m pretty excited about Wonderland the Musical arriving next June!

The Wilmington Drama League is located on 10 West Lea Blvd in Wilmington, across the street from where the old Sears used to be. (I’m sorry, I have to describe it that way.) Give yourself some time to pick up some refreshments before the show.