It’s World Turtle Day! I just learned that baby turtles communicate through their shells to coordinate hatching, which is awesome. And I don’t know about you, but the words “awesome” and “turtle” in the same sentence demand that I think of certain heroes in a half shell. (My brother was obsessed with the Teenage Mutant Ninja Turtles when they appeared in the 80s.)

Anyway, obviously the TMNT are celebrating World Turtle Day. If you’re a fan, you’ll want to check out the video spot and Teenage Mutant Ninja Turtles printable masks and wordfind below!

Plus, how to download the first movie for free.

Click the link below each image for the full-size printable. 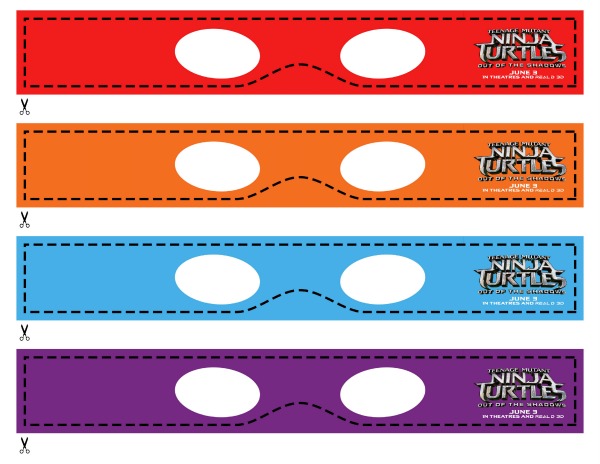 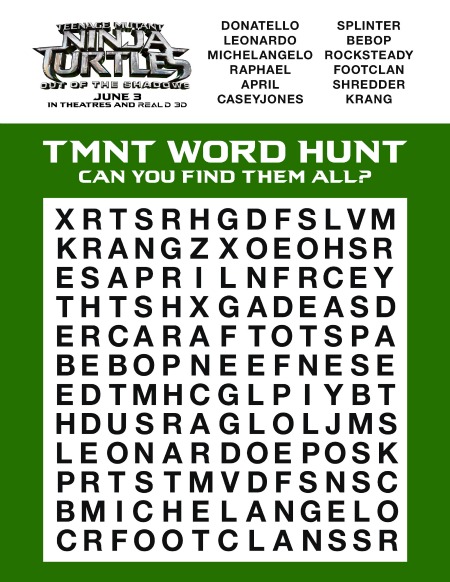 If you live near a Cinemark, they are running a deal right now where if you buy your tickets to Teenage Mutant Ninja Turtles: Out of the Darkness online, you’ll receive a digital download of the first movie. (Or if you have Amazon Prime, you can watch it there like I did.)

We just watched the first TMNT reboot movie last week and were disappointed that Casey Jones wasn’t in it, and then we realized that the sequel comes out June 3rd and he is in this one! So that was a nice surprise and we don’t have long at all to wait.

I’ll admit I was a little irritated by some of the changes to the origin story— seriously, who would have thought I would care about the Teenage Mutant Ninja Turtles? If you’d told teenage me that I would’ve laughed in your face— and Megan Fox is definitely not who I would’ve cast as April O’Neil. But I could see how people who were not so nostalgic/ intimately familiar with the original series and movies found it enjoyable. (And Will Arnett is still delightful, in spite of no longer being married to Amy Poehler.) 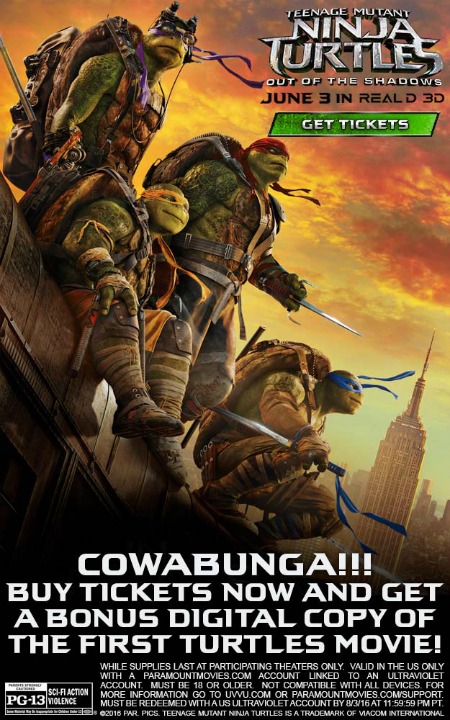 Teenage Mutant Ninja Turtles: Out of the Darkness movie synopsis:

Michelangelo, Donatello, Leonardo, and Raphael return to theaters this summer to battle bigger, badder villains, alongside April O’Neil (Megan Fox), Vern Fenwick (Will Arnett), and a newcomer: the hockey-masked vigilante Casey Jones (Stephen Amell). After supervillain Shredder (Brian Tee) escapes custody, he joins forces with mad scientist Baxter Stockman (Tyler Perry) and two dimwitted henchmen, Bebop (Gary Anthony Williams) and Rocksteady (WWE Superstar Stephen “Sheamus” Farrelly), to unleash a diabolical plan to take over the world. As the Turtles prepare to take on Shredder and his new crew, they find themselves facing an even greater evil with similar intentions: the notorious Krang.