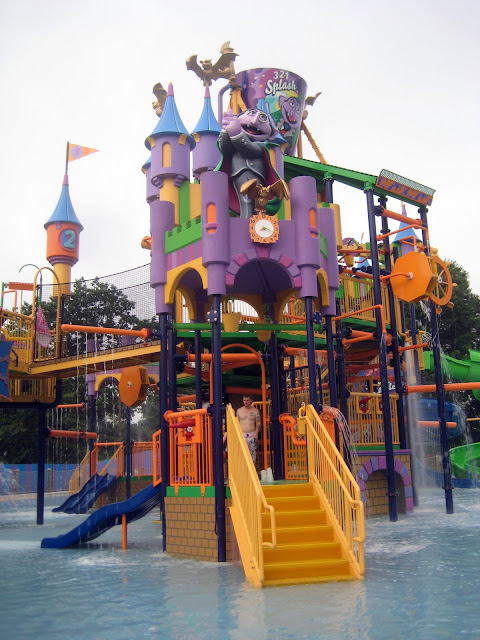 I’m a fan of Sesame Place on Facebook, and recently they put out a call:

Any families, with kids over 5, interested in being filmed playing in the Count’s Splash Castle for Fox29 before the park opens?

We were lucky enough to be chosen (!!! much excitement was to be had in the land of Elton!!!), and Sesame Place was kind enough to extend an invitation to stay all day if we’d share our thoughts on our blog. 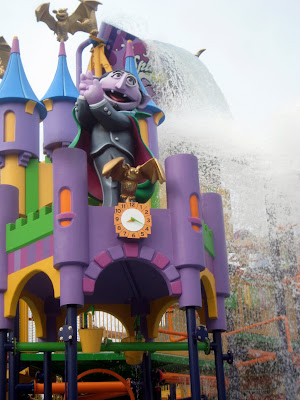 Now, I will be honest. I am not so big on getting my face wet, and the Count’s Splash Castle has water coming at you from all directions. YOUR FACE WILL GET WET. Do not say I didn’t give you ample warning.

And every so often that big bucket at the top fills with water and the Count will, well, count: 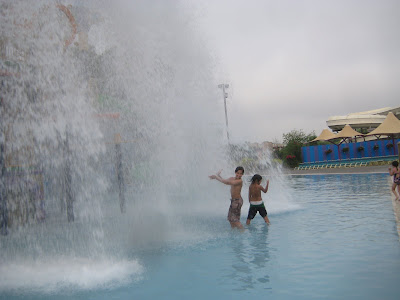 There quickly comes a point where you are as wet as you can ever possibly get, and you completely cease to care because you and the kids are having so much fun. 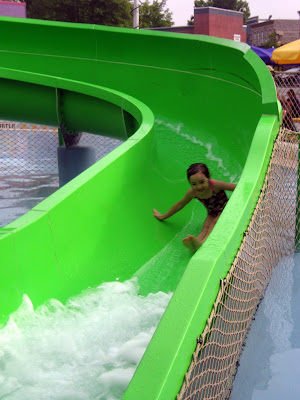 We went down the slides about a bajillion times. The guys (and gals) working at the bottom of the slides were always alerted to Cassidy’s imminent arrival, as she would hoot and holler the whole way down, her voice echoing off the walls:

“Woohoo! Yeehaw! I LOVE THIS SLIDE!”

And then the Count would count down again, and she’d make me report back for the deluge: 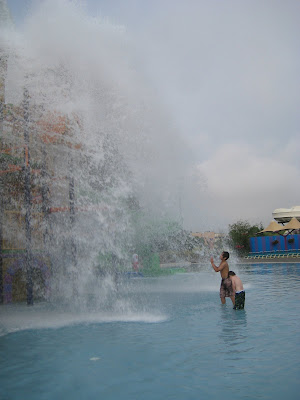 That went on for two hours, and then Mom got a little rest as we waited for the park to open.

Let me say here, as it doesn’t really fit anywhere else, that the people working the water slides were awesome. They were great with Cass, helping her off the slides by swinging her up and around, cracked jokes with me, and were generally in a much better mood than I would have been if I had to report to work and stand in the water two hours early.

Sesame Place was absolutely, a wonderful experience for my kids. And me, for that matter. It was a day that was ALL ABOUT FUN. Cass could ride all the rides, which was a big deal for her. The only areas she was not permitted into were for truly little guys, and somehow it doesn’t sting as badly to say “Can’t go in there, you’re too big for that.”

The older boys had a blast as well. There was hardly any complaining about the rides being too tame for them, as many incorporated an element to make it more exciting (i.e., a wheel that you could turn to make yourself whip around faster, a la the whirling teacups). They spun themselves sick and were satisfied.

The only one that met with some resistance was the merry-go-round, because I insisted on taking pictures: 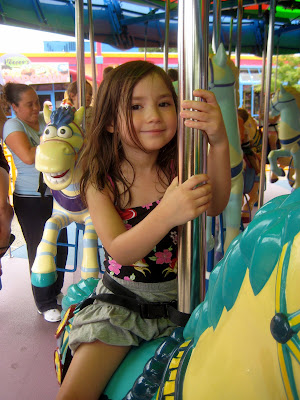 but I won’t go so far as to post pictures of my 9 and 11 year old boys on a carousel. I’m not that mean.

On a side note: I got a little dizzy even on the carousel! What happens to us as we grow older that makes us so more affected by these rides? 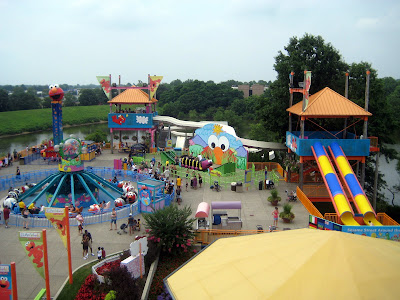 I can’t speak to how crowded the park is on a daily basis, but the Wednesday we were there was not crowded at all. We never had to wait through more than one cycle of a ride to get on. 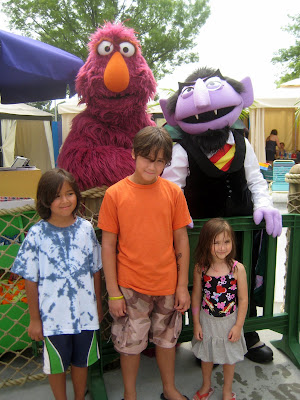 This was my first trip to Sesame Place. I had always been put off by the cost of the ticket: $50.95 plus tax, plus parking at $13 or $16, depending on location.

BUT, for $50.95 you can buy the Elmo’s Any 2 Day Ticket, which entitles you to a second day at no additional cost. So when you consider that as breaking down to $26 a day, the price is comparable to Six Flags, where the lines are INSANE and you’re lucky to get on ten rides all day.

Bottom line: for younger kids, Sesame Place is a much more appropriate and cost-effective venue if you opt for that 2 Day ticket.

More than that, though, Sesame Place is an experience. 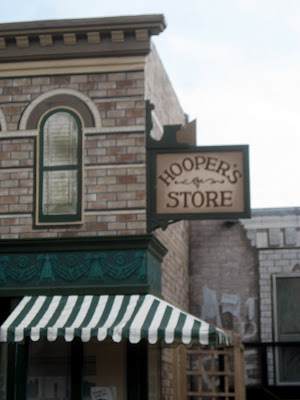 Where else can you photograph Hooper’s Store? 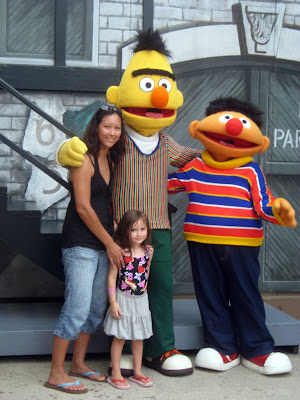 Where else can you pal around with cultural icons that you love as much as your children?

Where else can your kids be delighted by your over-the-top geekery? You know, when you stop short, point and screech “There’s Bert! JACOB, WILL YOU PLEASE TAKE MY PICTURE WITH BERT??!!”

After we ate lunch- somewhat expensive but totally respectable bacon cheeseburger platters for around $10- thunder began rumbling, so we didn’t get a chance to do the water rides like the Rambling River or Sky Splash. Nor did we get to take part in any of the interactive shows- Big Bird’s Beach Party, Elmo’s World Live, the Rock Around the Clock Parade.

We’d been at it for nearly 8 hours by that point, so there were no regrets, and all the kids slept the whole ride home.

We’re definitely going back, though. Twice. 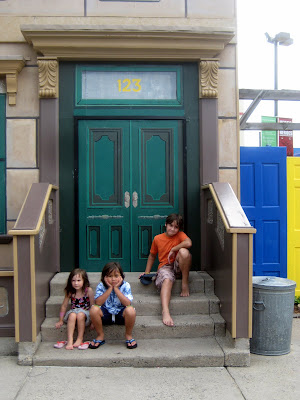 Don’t assume your child is too old. My just-turned-five-year-old seemed the perfect age. My 9 and 11 year old said it was the best time ever.

Pack a lunch. The food was better than I thought it would be, and a large drink was included, but it was still more than I wanted to spend. Kid’s meals are also available, at a lesser price, but it’s the typical hot-dogs-and fries kind of fare I try to avoid. Pack a good lunch, get your hand stamped as you leave the park to eat it, and put that money towards some non-everyday splurges like funnel cake or Dippin’ Dots ice cream.

Do the circle rides before lunch. They give you your money’s worth on these rides- you are on them just long enough that you are ready to get off. I am not sure how I would have felt if I’d gone on these with a full stomach. That is because I am a baby.

Don’t bother with towels. Seriously. Such a pain to keep track of, I wish we had left them in the car.

Avoid rubber flip-flops if you can. We aren’t used to these, they seemed like a good idea at the time, oh, the blisters we had at the end of the day!

Two adults would make life a lot easier. Keeping track of three kids by myself was a bit of a challenge, especially as I was trying to take lots of photos. Also, for the water rides it would be nice if you had an adult to watch your wallet and keys, although I don’t know how you would determine who gets to go on the ride, and who has to wait around.

Which brings me to car keys.

Like most people, I assume, I have one of those key fobs that electronically locks my car. After lunch (before the thunder started) we went back to the car and I locked up my phone and wallet. But what the heck are you supposed to do with the darn keys? I was not willing to pay out the $20 to use a locker, not for the two or three water rides we wanted to go on before we left.

Ultimately we decided to double-Ziploc bag the keys, but we didn’t get to field test that concept. And I hate to think what would have happened if it failed, anyway.

Someone has since informed me that you can buy a plastic tube that you wear around your neck to hold your keys, but I don’t care for that notion either. What if you get a leaky one? And I don’t approve of plastic, one-time-use devices, anyway (technically you could use it more than once, but you see my meaning).

If you have a solution to this issue I’d love to hear about it, waterpark novice that I am.

My solution is to write Sesame Place and suggest that they put up a wall of hooks, valet-style, and hire someone to take your keys and give you a (waterproof) ticket, coat-check style. This would be inexpensive to install and everybody would use it, I should think, as long as the cost was reasonable. To cut down on lines you could reserve and pay for your hook when you buy your ticket. If you like this idea too let Sesame Place know!

Any other tips for visiting Sesame Place? Got a story to share? Please leave ’em in the comments!