We visited the Robot Revolution at the Franklin Institute on opening day (my birthday!). Here’s what you need to know before you go, along with discount codes and ways to save. 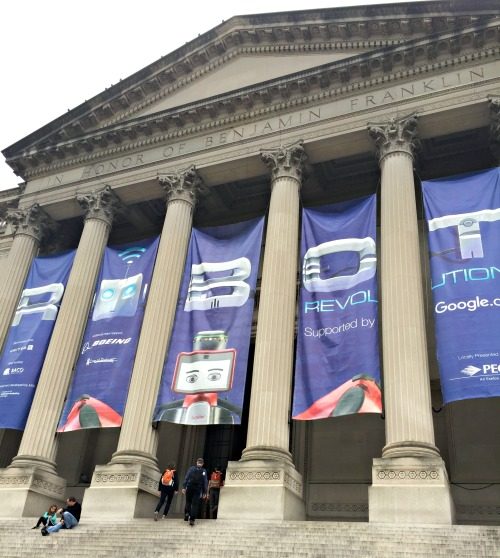 Like most people, I’m fascinated by robots. I’m amazed at the leaps in technology and innovation that have brought us robots that “think” and learn, that move smoothly, that appear more and more human-like. (I’m also sort of freaked out by those exact same things, thanks to a healthy love of science fiction.)

So when we were invited to the opening day of the Robot Revolution exhibit at the Franklin Institute, there was no question about whether we would go, even though it was my birthday and I had a party to throw and a house I was supposed to clean beforehand. I know where my priorities lie. 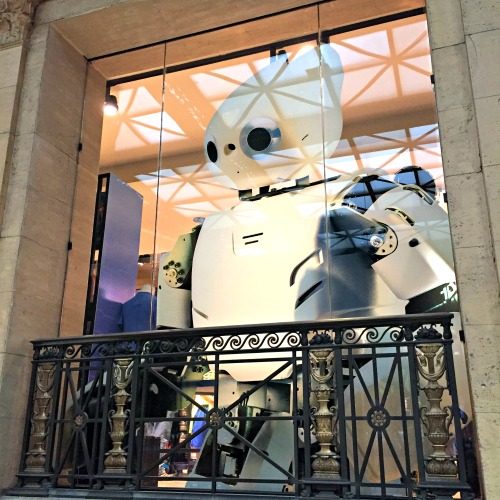 The Robot Revolution exhibit is supported by Google.org with additional major support from The Boeing Company, and consists of 40 robots, more than half of which can be operated or interacted with. It’s a timed exhibit, meaning you’ll receive a separate ticket for a specific time to enter the exhibit (in theory, this keeps crowds down).

We arrived just as the museum was opening and I can’t recommend that tactic enough. Always aim to visit first thing in the morning or during the week to get the most of the interactive exhibits.

I spent a lot of time watching “Baxter” play tic-tac-toe against two people at once, and another robot act as Blackjack dealer. The robots didn’t always win, but they won a lot. 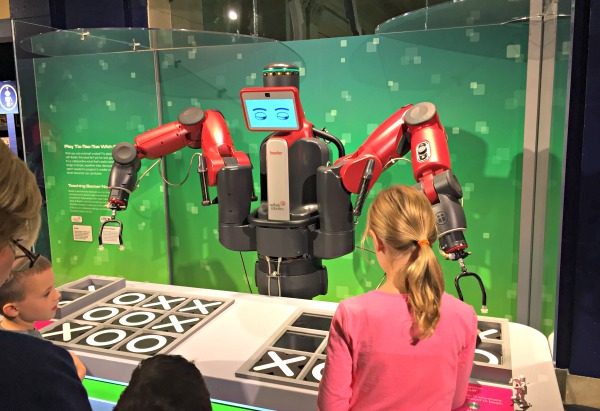 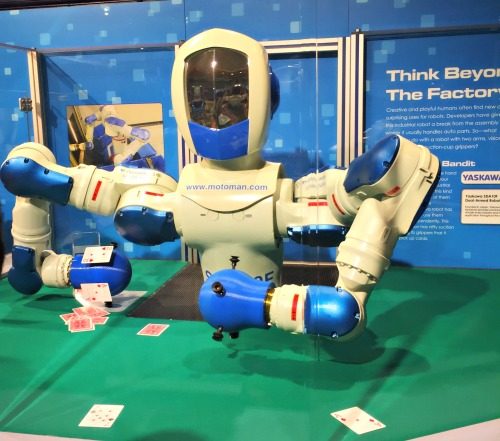 I stood transfixed as a robot solved a Rubik’s cube, over and over, like it was nothing.

I made Cass tell this robot to do pushups and karate chops roughly a thousand times. 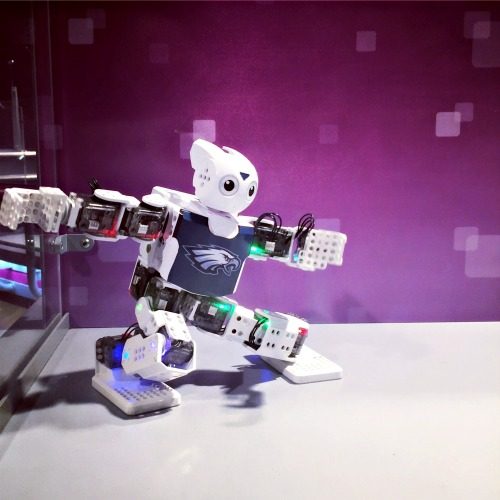 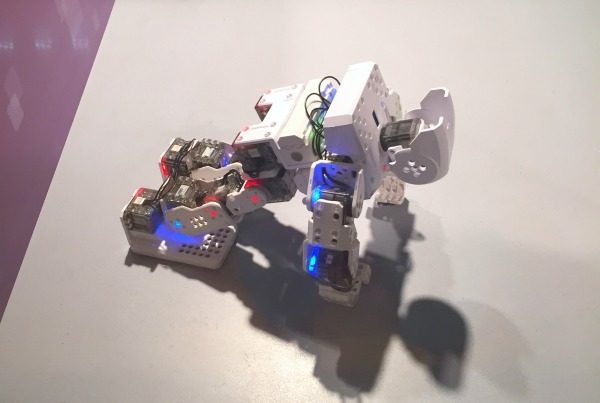 I don’t know why, but I find a robot doing pushups just delightful. Look at that form!

There’s also a simulated self-driving Google Car, soccer ‘bots games throughout the day (snag a spot before the starting time and guard it vigilantly; we had a dad place his much taller kid right in front of Cass as the game started so we couldn’t see), an all-terrain crawling robot developed by UPenn, a therapeutic baby seal robot that reacts to your touch, and an interactive live drone show, Drone Zone.

Chances for kids to work on their coding skills abound, and I was surprised by how effortlessly Cass navigated these. She’s encountered them or something similar before, online or at school, and they were second nature to her. Kids today are growing up in a wholly different world, a world where they are immersed in robots, computers and tech from the get go, and it was really interesting to see this exhibit through my own lens and compare it to hers. 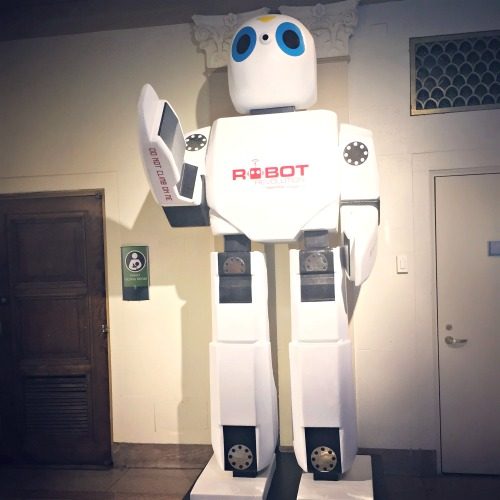 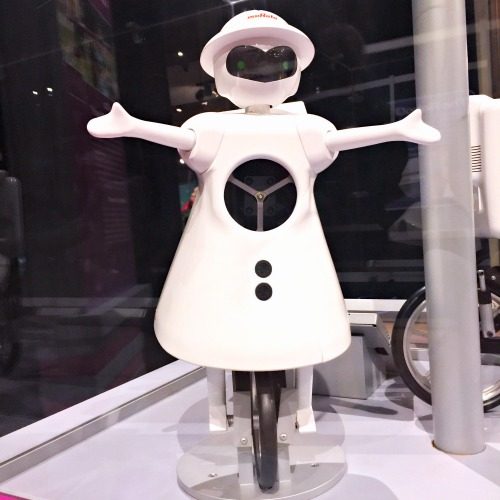 As I mentioned, our time to visit the museum was limited, but we did make sure to visit the exhibit’s gift shop: there’s a treasure trove of awesome kits, sets and toys for kids and kids at heart here. I wanted all the robot things, especially all the wonderfully weird windup robots, but settled for now on a pair of robot earrings.

We made a quick detour to visit the SportsZone (Cass’s favorite) and Newton’s Dream (my favorite, a kinetic sculpture where you watch balls travel through tracks and tunnels). Then we saw that a movie was about to start in the planetarium, so we ducked in to watch a segment about wild weather throughout the solar system. I hadn’t realized it was Cass’s first planetarium experience, and she about jumped out of her seat a number of times. It was great.

My point being: the Franklin really never gets old, even as your kids get older! The travelling exhibits are always worth catching (Jurassic World: The Exhibition starts November 25th) and it’s always fun revisiting old favorites. If you’re going to visit more than once a year— and if you have kids, you really should— a family membership is the way to go. It’s a great deal and as a bonus you’ll get into the Robot Revolution exhibit for free until the end of the year. 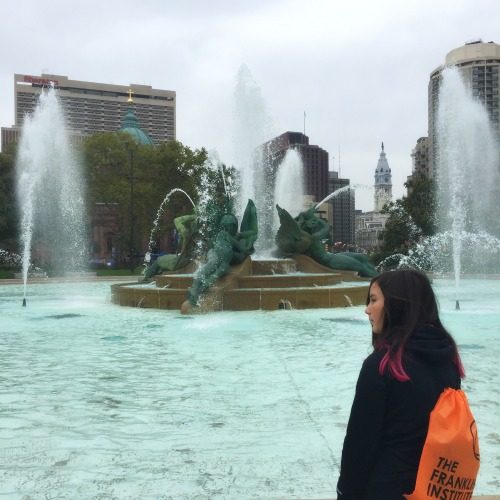 If you’re only planning on doing the trip once, though, here are some ways to save.