Remember when the Riverdance frenzy first swept the nation years ago? Twenty years ago, not that I’m old or anything.

My mom was obsessed with it, and I tried to get tickets to see the show live and no dice. It sold out almost immediately, I think.

If you’ve got a similar story, take heart:

The 20th Anniversary Tour of RIVERDANCE will be performing at the Academy of Music in Philadelphia from June 14th through June 19th!

The international Irish dance phenomenon is back by popular demand in Riverdance – The 20th Anniversary World Tour. Drawing on Irish traditions, the combined talents of the performers propel Irish dancing and music into the present day, capturing the imagination of audiences across all ages and cultures in an innovative and exciting blend of dance, music and song. Of all the performances to emerge from Ireland – in rock, music, theatre and film – nothing has carried the energy, the sensuality and the spectacle of Riverdance. 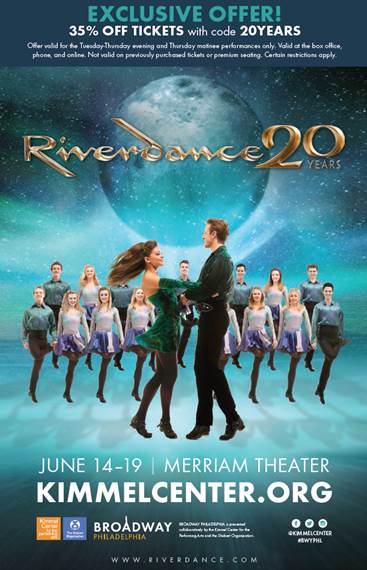 You can purchase your tickets at kimmelcenter.org.