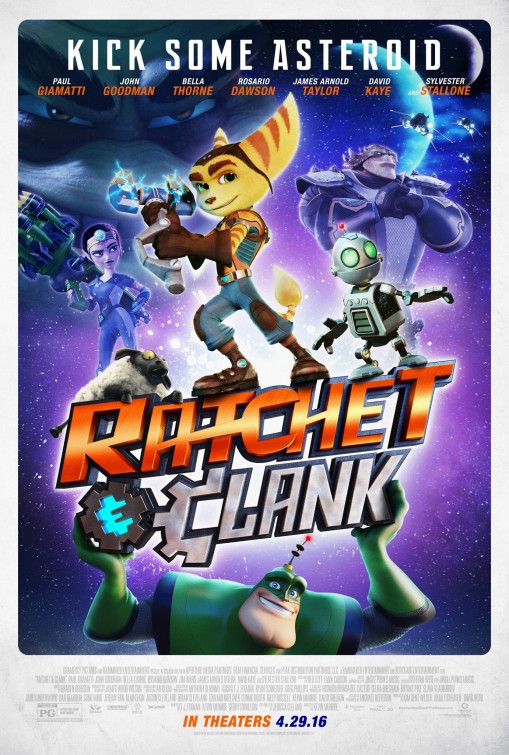 TL;DR: Not great, not bad, not obnoxious. Nice animation and fun soundtrack.
Cute, mildly amusing, good for young kids or a rainy afternoon.

To see a kids’ movie.

Obviously, this wasn’t just any old made-for-kids movie. This was a press preview of RATCHET AND CLANK, a CG-animated movie based on the PlayStation video game.

Two unlikely heroes struggle to stop a vile alien named Chairman Drek from destroying every planet in the Solana Galaxy. Ratchet is the last of his kind, a foolhardy “lombax” who has grown up alone on a backwater planet with no family of his own. Clank is a pint-sized robot with more brains than brawn. When the two stumble upon a dangerous weapon capable of destroying entire planets, they must join forces with a team of colorful heroes called The Galactic Rangers in order to save the galaxy. Along the way, they will learn about heroism, friendship, and the importance of discovering one’s own identity.

The boys wanted to see how well they’d managed translating a game they enjoyed into 90 minutes on the big screen.

I myself not only never played the game, but I don’t even remember the kids playing the game, which honestly raises some concerns about my longterm memory (or lack thereof) but that’s a story for another time. Since I went into the movie with no preconceived notions, no nostalgia, and no expectations, I was pleasantly surprised. While Ratchet and Clank didn’t hit the very high notes that some animated films achieve— like say, Big Hero 6, or How to Train Your Dragon, or The Iron Giant— it also didn’t hit the lows that so many kids’ movies do (I won’t call any out by name but I’ve spent more than my fair share of time sitting in movie theaters praying for the thing to end).

What that means is that Ratchet and Clank is pretty neutral. I didn’t hate it, I didn’t love it, it dragged a tiny bit at the end of the first third but made up for it during other action sequences. There were a fair number of jokes that I knew would have landed with my 11 year old (who was at soccer) but elicited eyerolls from my older kids. The plotline, like in a video game, barely registers. There’s not a lot of character growth, or explanation of the villain’s motives, but the main audience I imagine is younger kids wanting more of the video game characters, and that you have.

Some random thoughts about the movie:

I guess overall, I wanted a movie that moved and felt like a video game, while developing a strong plotline from the simplistic outline the game provides. Instead we were given a movie that was simply derived from a video game, and while that wasn’t a bad thing, it wasn’t a great one either, and we’ve come to know for a fact that the animated film industry can do so much better.