Alice Through the Looking Glass review, whether you need to see it in IMAX 3D, suitability for young viewers. Plus, my recommendations for more Wonderland movies and miniseries. 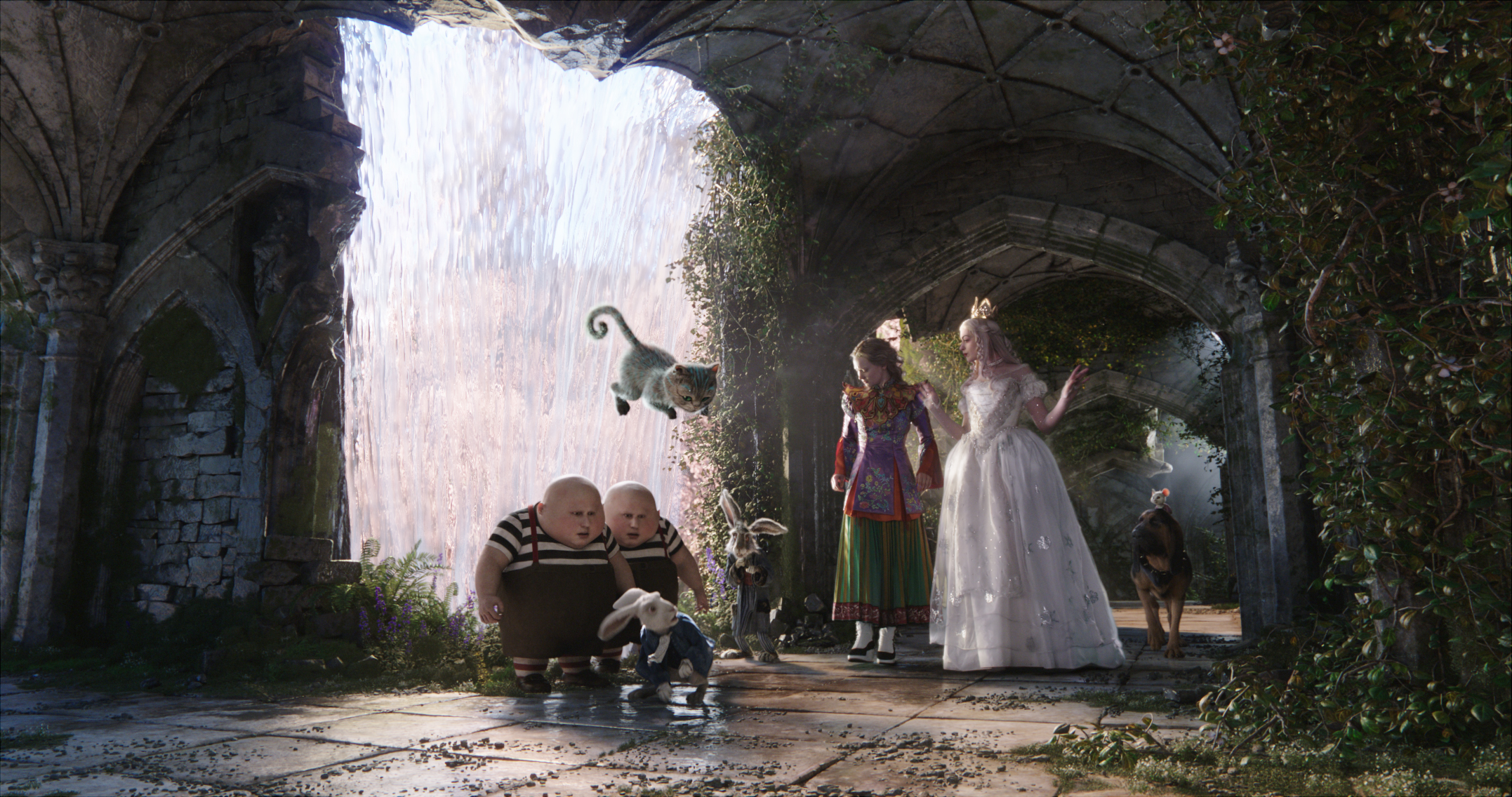 “So, they basically made this movie for you,” my son Maverick said to me as we left the early screening of Alice Through the Looking Glass on Monday.

It’s amazing, really, how the story of Wonderland endures; how Alice finds herself in new iterations all the time, how the concept of going down the rabbit hole or through the looking glass are so deeply ingrained. I welcome every new interpretation of Alice I come across, for helping to keep the story alive and fresh in people’s minds, but of course some are better than others.

I did not love Tim Burton’s Alice in Wonderland in 2010. I liked it OK, because two hours with Alice are two hours with Alice, but it didn’t knock me out. It was a little too in your face, a little too manic, a little too obviously Johnny Depp and Helena Bonham Carter being Johnny Depp and Helena Bonham Carter. A darker version of Alice is fine, but this movie was also trying to appeal to smaller kids, and the quality of the weirdness laced with childishness didn’t quite do it for me.

Alice Through the Looking Glass is the rare event where the sequel far excels over the original. It’s worth noting that Burton produced, but did not direct this movie, and the screenplay came from the writer of Beauty and the Beast.

Through the Looking Glass is my favorite of Lewis Carroll’s works, but the plotline is basically a bunch of random encounters stitched together by Alice’s journey across the chess board. We’d already encountered the majority of the characters involved, so I was confused by what the new movie was going to cover. I deliberately didn’t learn anything about the plot before seeing it, and similarly I’ll not ruin it by telling you a lot about that here. 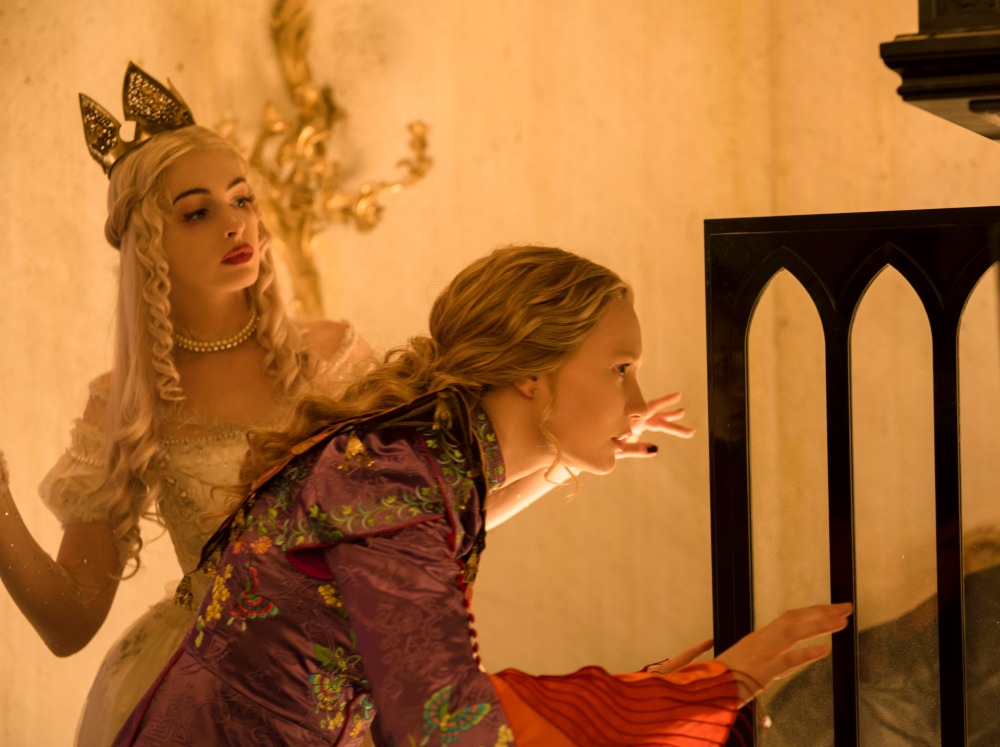 What I will tell you is that the plot hardly matters in the end. There are glaring plotholes and major issues all over Alice’s story— which I wouldn’t have a problem with if they were occurring in “Underland” and subject to their own set of rules, but these are in the real world. Meanwhile, the main premise of the Underland story involves Alice threatening the safety of everyone and everything simply because the Hatter is not only mad: he’s depressed, poor thing. And the takeaway is that she has to do it because that’s what a good friend would do. Is it really, though? There was no other possibility in the land of the impossible?

The meat of this movie lies in the fantastic visuals— the incredible detail of the sets and costumes; the character development; the lovely performances; and the faithfulness to the feeling of Carroll’s books.

I saw this movie in 3D, and I think it was worth it (I normally hate 3D movies). Time plays a big part (literally, by Sacha Baron Cohen) and Time’s castle is a breathtaking array of gears and machinery. I love that sort of thing—hence Mav’s comment about this movie being made for me—and probably would have been pretty content with the movie if it had all taken place there. But no, pretty much every scene in Underland is visually stunning, especially the one with the Jabberwocky, and every sea-faring moment (there are a lot of them) breathtakingly exciting.

There are a surprising number of action sequences in this movie, now that I think about it. 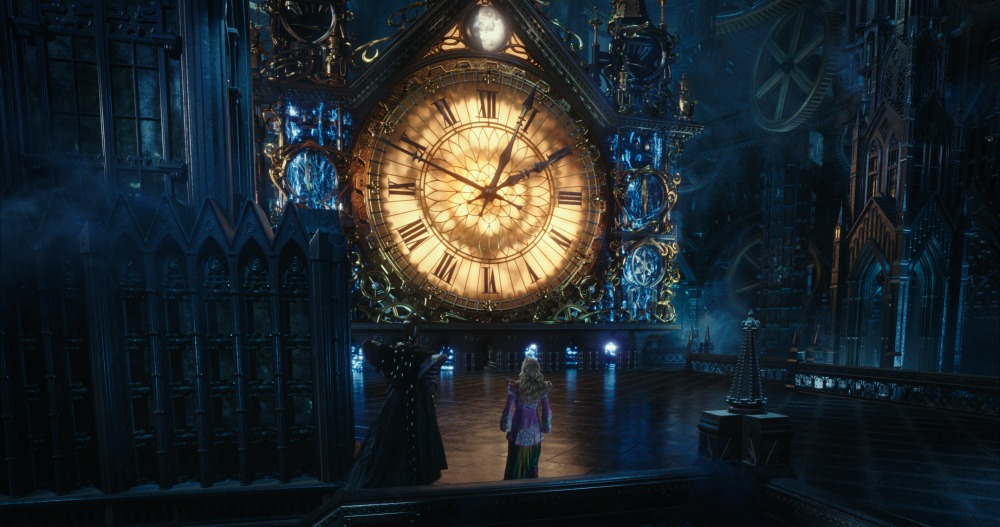 “You can’t change the past, but you can learn from it,”  Time tells Alice, and traveling through time we witness events that make the nonsensical actions of the people of present day Underland… make sense. We feel sorry for the beautiful little girl that the Red Queen once was, and regret the circumstances that steered her from what could have been. We sympathize with the Mad Hatter’s yearning for his father’s approval and sadness finding himself alone. And poor Time, who is incredibly powerful yet has such a lonely job to do.

Speaking of Time, I only know Sacha Baron Cohen from his annoying Borat character. He was incredible in this role, by turns comedic, charming, menacing, sad. Top notch. 10 out of 10.

Johnny Depp and Helena Bonham Carter showed remarkable restraint this time around, turning in performances that were suitably strange, yet strangely sweet. 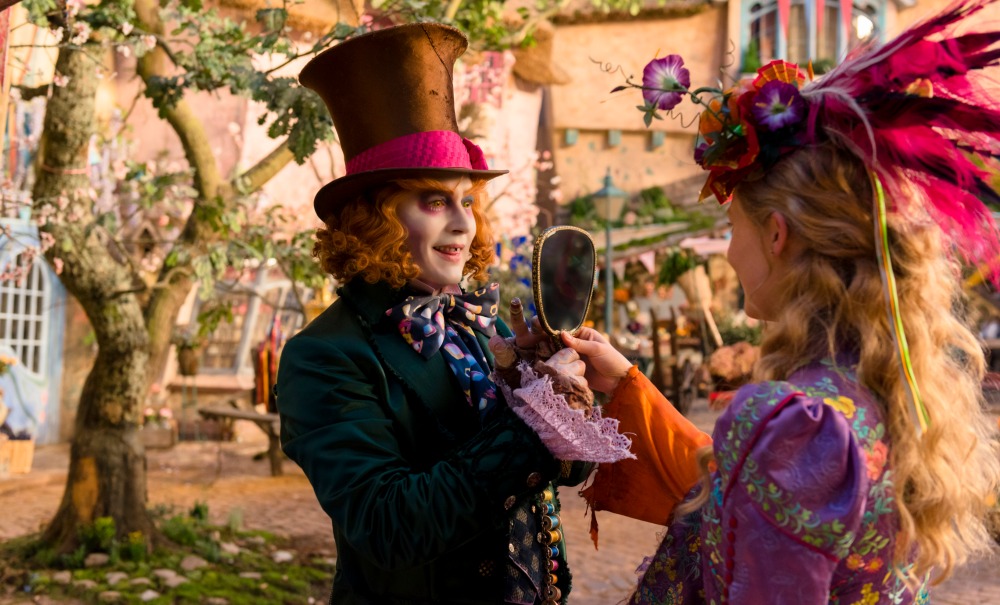 Mia Wasikowska as Alice is fine; Alice is basically a placeholder character that we build a story around, so honestly the more neutral that role is the better, with moments of female defiance that are oh-so-not typically Victorian. She does that very well here.

AND. Andrew Scott (BBC Sherlock‘s Jim Moriarity) shows up in a moment of casting brilliance as a doctor in an insane asylum. It just gave the character an additional, delicious layer of fear and menace that wouldn’t have happened otherwise in the short time we see him. Bravo on that choice. Excellent, excellent.

I have to mention a moment that touches on why it’s always tea time that I found delightful. Clever, clever.

Alice Through the Looking Glass is definitely worth your time, is suitable for even young kids, is a visual feast in every way, and spurred an easy hour’s worth of discussion with Cass and Maverick (not unusual for Jake and I to deconstruct a movie this way, but Cass and Mav are not usually like that). I recommend IMAX 3D for the full richness of the action sequences. 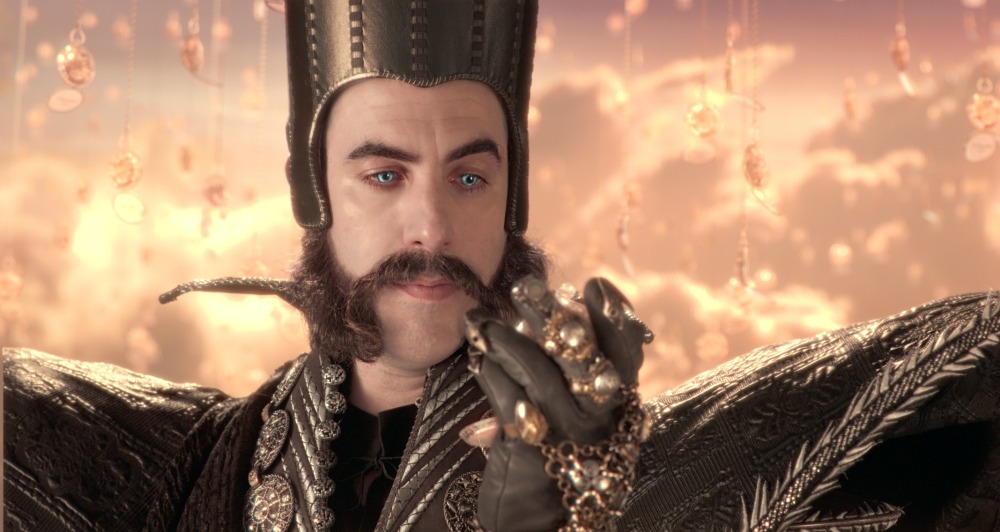 If you’re up for even more Alice, my favorite iterations follow (in no particular order), with affiliate links. And, you can find fun puzzles, coloring pages and other Alice Through the Looking Glass printables here!

Only available on DVD right now, but I originally saw it on Netflix. This one has a more futuristic, steampunk feel to it. Kathy Bates and Tim Curry are in this one, but it was the Mad Hatter and White Knight that I fell in love with.

This one is not for very little kids. It’s wonderfully creepy and is a surreal stop-motion masterpiece that I’ve watched many, many times. It’s oh so very clever, but definitely not for everyone: it’s not scary, or gross, but has a nightmare-ish quality to it while still feeling magical. It’s very difficult to describe, and that’s part of why I like it, I suppose. Let’s put it this way: if you’re inexplicably drawn to taxidermied animals in costumes, you’ll probably enjoy this.

Once Upon A Time in Wonderland

I was introduced to Once Upon A Time through the brief spin-off, Once Upon A Time in Wonderland. It was charming and the costumes were freaking fantastic; you can watch the episodes via YouTube. More importantly, I went on to become obsessed with the Once Upon A Time series, which is exactly the sort of thing I love: modern day revisiting of fairy tales that are faithful to their darker origins. And yes, there are more episodes of that series that delve into Wonderland, and you can binge away on Netflix or Amazon.

This is the one with Martin Short as the Mad Hatter and Whoopi Goldberg as the Cheshire Cat. It’s from the same time that Merlin was a big hit, and it has much of the same feel. It’s one of the few times that I actually liked the Alice role. Good for young kids, available for streaming on Amazon.

BBC’s 1998 Alice Through the Looking Glass

It’s BBC, and it’s true to the book. I love Kate Beckinsale, and there are other great performances here. A few sequences that are a bit dark, surreal and scary, so not for very little kids. Available for streaming on Amazon.

I feel like there was a BBC production when I was a kid that I found deliciously scary. Amazon has added a few more Alice options since I last checked, so maybe I will finally find it!

If you saw Alice Through the Looking Glass, what did you think?